Roll up! Roll up! A different kind of circus is coming to town! 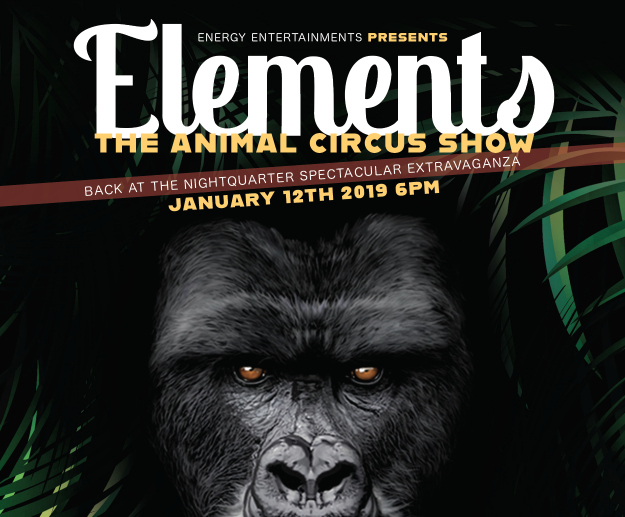 These are not real animals but part human and part animal! A thrilling combination of circus craft, death-defying stunts, world-class circus stage performances, aerials, acrobatics and fire is coming to NightQuarter.

You will not see any animals used within this performance, but we do promise to keep you on the edge of your seats with amazement and put you into fits of laughter.

Check out the highlights from the last show below;

Read the full write up in Blank GC Magazine – http://blankgc.com.au/elements-world-famous-animal-circus-show-nightquarter/

As well as fire shows Energy Entertainments also offer Body Flow Workshops
Body Flow Workshops concentrates on cognitive movement training while having fun. Combining martial arts, movement, yoga, circus games and activities Body Flow has created a fully functional workshop that focuses on mind and body awareness, reactions, balance and hand to eye coordination. Using the body, balls, batons and poi the workshop will cover a wide range of exercises and skills to keep you and the team stimulated throughout.

What has happened in the past?
2016 has seen the premiere screening and release of ‘Heart of Fire’ documentary. The creation of ‘Freaky Fire Circus’, performed extreme entertainment at the GC600 Superfest, put together an 8 piece Tribal Warrior fire and drum show on an island, Collaborated with ‘Spent Clothing’ and BMX rider ‘Chris James’ to fuse BMX and Fire, performed on a half pipe floating in a river with Buskers By The Creek Festival, performed on roof tops, at weddings, supporting bands and many more events and occasions. We have danced and celebrated with many cultures from around the world this year and we are looking forward to what the future brings!
2015 was an action packed year with the making of ‘Heart of Fire’. A collaboration between Film maker Elijah Cavanagh, Soundie Gabrielle Fry and Fire performer Neal Webb. Lots of private events, weddings, festivals, openings………etc
In 2014, Energy Entertainments performed at the Warner Brothers Movie World Fright Nights, the Palazzo Versace for The Magic Millions and Early Risers Breakfast meetings, Metricon Stadium for the Sun’s AFL opening match and games throughout the season, Swell Sculpture Festival, The Dust Temple (part of the Bleach Festival), East Nightclub, Bread n Butter, Surfers Paradise Festival, several weddings including Western weddings, Indian weddings, Greek weddings, Middle Eastern Weddings and many other private events.